I am a storyteller. But then, aren’t we all? Some stories come out of us in the most cryptic horrifying manner while others are simultaneously flighty and invigorating. Then there are those who tell stories that put us to sleep; unfortunately, we sometimes call them teachers or family. 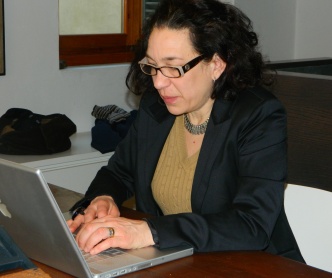 However, occasionally we come across a story that actually doesn’t speak. It simply unfolds. You get to watch it live. You have the great opportunity to pay admission to its viewing – mine being a plane ticket to Italy. Once landed (if you are on the same trip), you drive to your destination, knock on the door and sit down for dinner to feed your face because you’ve been craving good food all day after a long tedious flight. Just when you are ready to take that first luscious bite, the story stops you and suddenly replaces the pasta or pesce or prosciutto con formaggio you were about to ingest. The story is sitting right next to you – vivacious, garrulous, sensitive, and willing to share.

I have met many stories this past year being in Italy. All of them have come in these wondrous packages that have entertained me more than my favorite television programs; and believe me, I love watching TV. But I am losing interest in what TV programming has to offer. I am realizing that much of the programming, in all its glamour and unrepresentative images of real life, just can’t fully capture the essence of how beauty unfolds – how it comes in a 5’8” package, thick dark curly hair, Italian American mystique who waves a magic wand to create and produce media programming for the masses. You are saying, “Get to the point! Who in the world are you talking about?”

Here are a few facts about this Sicilian American woman who lives in two worlds – Italy and the United States:

I could continue listing facts, but I wanted to share a few bullet points and then write about Gia personally. Why? She is charming and smart. Moreover, she is working in an industry where women are not readily in the forefront. I don’t think it is a coincidence that we connected at this particular moment in time. My sister had been telling me about her media experience for a while and agreed to have a dinner that included Gia and her husband Giuseppe (November 2013). My first impression when seeing her was, she gleamed. Not glowed, but gleamed. She had a flare and spunk that was undeniable. I immediately loved her style. This could be because she reminded me of myself – casually sophisticated, classic and comfortable. Granted, I may very well be the only one who describes myself as such, but I am allowed! When we sat down at dinner there was no lapse in dialogue, uncomfortable silence, or pretense to come up with silly questions to mask any sort of weirdness in the air. Gia was fluid, quick, energetic and had stories to tell. Her mind was whizzing, and at times I felt I had to play catch up because her tongue was quick. But get this – her eyes were very intent on listening, even when she spoke. Yes, she spoke and listened at the same time. She also observed and nodded, as if anything I said actually sounded golden. I mean, SHE TRULY LISTENED. And if you were to ask me, “Well, what did you say?” I have NO IDEA. I can’t remember my words but I can remember her eyes, the two semi-vertical lines that crinkled between her brows indicating complexity, thoughtfulness and her interest in wanting to know about little brown ME.

This meeting was only the first of a few others. This led to my requesting an interview with her about the work she does and how she balances her life. Maybe I shouldn’t have been surprised, but I don’t assume people will say “yes” just because my big pleading brown eyes say, “YOU MUST DO THIS FOR HUMANITY!” I was humbled she agreed, because here’s an incredibly curious woman who tells other people’s stories for a living. And she was willing to sit with me for a few hours and share snippets of her life story. However, the video I have included is nine minutes long. Nine minutes worth of wisdom that you attain through living life the best way you know how…by putting one foot in front of the other.

One last thing, I am a firm believer that certain artistic expressions are meant to be abstract while others should be obviously understood. For the purpose of this article, I want to make it abundantly clear the importance of featuring Gia. I am moving into a unique phase in my life. I am meeting absolutely astonishing women and men who are moving the earth’s axis, as far as I’m concerned. They are shaping their existence by simply operating in what they love to do. While doing this, they create balance and figure life out as it unfolds. Gia does this. She does this in a communal way by offering her skills and services on a global level (after all, media is global). She does this by teaming with her husband to create a business – I love that she and her husband are business partners and live half the year in Italy and half the year in the United States (give or take a few months). And she openly admits that she is figuring life out and it’s not easy. Moreover, it’s not even close to being done. I believe we attract what we are. And if this is a bird’s eye view to how my artistic life is unfolding simply by what I am attracting and vice versa, then my goodness, WATCH OUT WORLD!

Dream Jobs Can Be a Reality (Gia Marie Amella), Part 1

Dreams Jobs Can Be a Reality (Gia Marie Amella), Part 2

About the Contributing Writer:

Traci Currie is a Communication and Visual Arts lecturer at University of Michigan-Flint, as well as a knit-crochet artist, writer, and spoken word performer. She has been a part of the art world for over 15 years as an art gallery board member; spoken word series organizer; performer, nationally and internationally; and published poet. She believes the PRC will help young women reach their highest potential. “This organization is about empowering women to take ownership of their lives, claim their identities and be the positive change they wish to see in the world they live.” Read her latest posts here.

Yes, pause.Take a minute; you'll be surprised at how making this a daily practice supports self-care, self-compassion, and peace of mind.